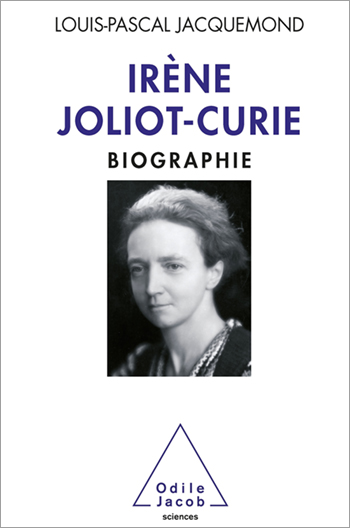 Louis-Pascal Jacquemond, a historian, teaches at the Institute of Political Science (Sciences-Po). He is an honorary academic inspector and a regional educational inspector for the Grenoble region. A graduate in law and political science, he holds an agrégation in
history and was formerly a senior fellow in pedagogical research at the French National Institute for Pedagogical Research (INRP). He is the author of La Place des femmes dans l’Histoire, Une histoire mixte, and a member of the governing body of Mnemosyne, an
association for the development of women’s history and of gender studies.
Irène Joliot-Curie marked the first half of the twentieth century in three iconic ways: she was a Nobel laureate, like her mother, Marie Curie; she was one of three female ministers in Léon Blum’s government, in 1936; she was an activist for women’s rights and a  self-proclaimed feminist.
Her lifetime spanned two world wars, the national and international crises of 1929 and the Cold War, after 1945.
She witnessed radical changes in science and the development of nuclear physics.
In addition, she saw three key moments in the history of feminism: the suffragette movement; women’s active participation as medical staff at the front during the First World War, and the emancipation that followed it; the struggle for women’s rights after the Second World War.
The most striking aspect of her trajectory is the way she combined her scientific, Nobel-Prize winning career with her political activism and her deeply committed feminism — under the tutelary aura of a mother who was already a legend during Joliot-Curie’s lifetime and who has overshadowed her in posterity.
• The trajectory of a brilliant scientist who was deeply committed to the ideals of equality and fairness.
• The exceptional life of an outstanding woman finally revealed here in all its many facets.
• The story of a family and of an intellectual and political milieu.