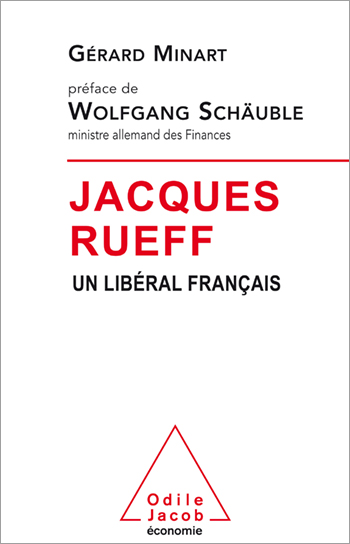 Jacques Rueff A French Free-market Economist With a preface by Wolfgang Schäuble, German Federal Minister of Finance in Merkel’s Cabinet

Gérard Minart was formerly editor-in-chief and vice-chairman of the board of the French daily newspaper La Voix du Nord. He is the author of numerous works on free-market economics.
Wolfgang Schäuble is the German Federal Minister of Finance in Angela Merkel’s cabinet.

Jacques Rueff (1896-1978) was a French economist. He is remembered primarily for the economic plan to balance the budget that President Charles de Gaulle imposed on a reluctant government in 1958. But it has been generally forgotten that he was also the architect of the ‘Poincarré franc’ which fixed the parity of the French franc in 1928. And that, in 1938, along with Paul Reynaud and a team of young thinkers who would become prominent (Michel Debré, Alfred Sauvy, Maurice Couve de Murville), he laboured for French economic recovery against a backdrop of rapid German rearmament.
This biography does justice to Rueff’s contributions. A tireless opponent of received ideas, Rueff drew on scientific rationality and on hard facts to defend his ideas on monetary policy. He was strongly opposed to public debt, which he qualified as ‘social gangrene’, and he advocated competition and opening the French economy to international trade.
A supporter of the emerging European Economic Community, Rueff personified the renewal of free-market thinking which placed economics at the centre of the nation’s social order. Rueff’s exceptional life offers a valuable insight into the French approach to free-market economics.

• A behind-the-scenes view of economic history and its debates (unemployment, international monetary policy, public debt) as well as of some eminent economists (Rueff publicly confronted both Keynes and Triffin).
• What does it mean to be a French free-market economist? This question, which continues to make waves, both on the French Left and on the Right, explains Wolfgang Schäuble’s marked interest in this book, which he agreed to preface.
• Jacques Rueff personifies a little-known yet typically French tradition of engineer-mathematician-statistician economists, in a direct line from Antoine Augustin Cournot.