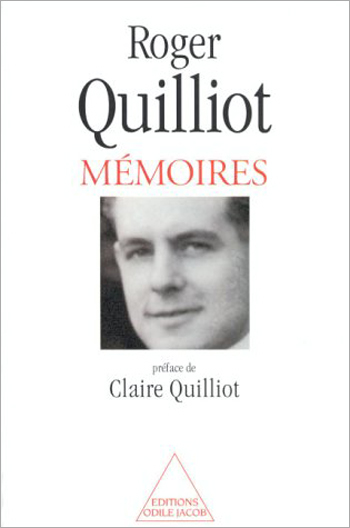 local_libraryTake a look inside
"Here I am, projected outside time, staring lucidly at my impending death. I know that time made me what I am, the heir not of heroes but of modern craftsmen, who each knew their place (...). I have lived; that is enough. But others before me lived and died, and their lives have been woven into mine."Written in a lively style, the first volume of Roger Quilliots autobiography covering the years 1925-1945 is more than a memoir of the authors childhood and youth. He presents the reader with two decades of French history through the stories of "those men and women who, modestly and without knowing it, sometimes behaving nobly, sometimes basely, helped build a century that combined madness and hope, where daily life and major historical events mingled." The period saw the advent of radio, of affordable automobiles, and of paid holidays for French workers  but it also saw the outbreak of the Spanish Civil War and the rise of Nazism.

Roger Quilliot was an academic and a politician. He was a friend of Albert Camus and edited his complete works in the highly respected Pléiade edition. For nearly twenty-five years, he was the mayor of Clemont-Ferrand, in central France. He was Minister for Urban Development and Housing from 1981 to 1983, and was elected senator for the Puy-de-Dôme. He committed suicide in 1998.