...
Catalog
Documents
Testimonials, News, Investigations
Who Am I? What Do I Know? 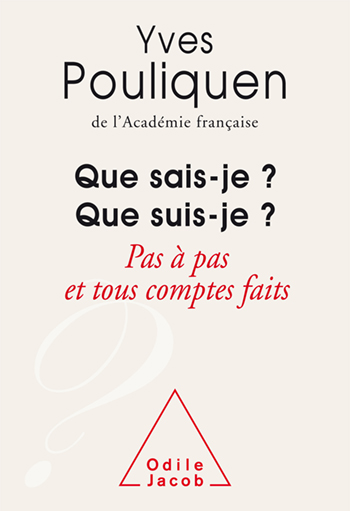 Who Am I? What Do I Know? Little by Little and When All is Said and Done Member of the French Academy

Yves Pouliquen, a member of the French Academy, was formerly Chief of Ophthalmology at the Paris hospital l’Hôtel-Dieu. He is the author of the highly acclaimed Transparence de l’oeil, Le Geste et l’Esprit and of several biographies of 18th-century scientists and physicians.

Do men and women know what they are? Not who they are, which would mean what they know of their habits and feelings, but what they are, meaning what they are made of, what their origins are.
This is the question that Yves Pouliquen asked himself throughout a life of scientific inquiry as a medical practitioner and research scientist. What did biological evolution make him? Obviously, the man he became. But he is also the product of an enthralling adventure — one that cannot be separated from the beginnings of the Universe.
The origins that Yves Pouliquen recounts here are fascinating — and much more so than the tales humans invented to reassure themselves.
The narrative is punctuated with personal meditations made during long summertime walks in Brittany as the author reveals his most cherished hope, that knowledge will be a source of serenity.

• A literary narrative about a singular existence devoted to science with, in the background, the enthralling history of life on Earth from its first appearance billions of years ago and as it continues in each one of us today.
• A calm but also uncompromising meditation showing how science can improve our lives and help us face death.