...
Catalog
History and Geopolitics
Geopolitics and Strategy
Resistance and Dissuasion 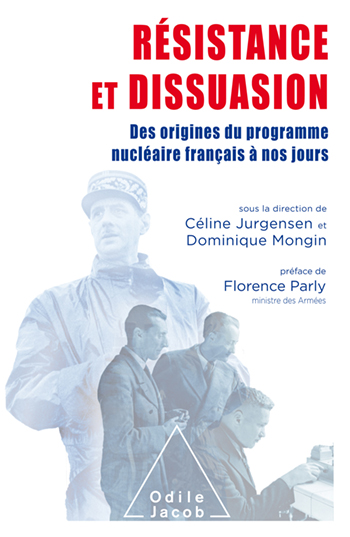 A collection of work edited by Dominique Mongin and Céline Jurgensen.
Preface by Florence Parly, Minister of the Armed Forces; Foreword by Bruno Racine, former president of the Bibliothèque nationale de France.
Dominique Mongin has a doctorate in history (Université de Paris-I Panthéon-Sorbonne), specializing in the history of contemporary international relations as well as in issues of security and defense.
Céline Jurgensen is director of strategy in the Military Applications Division at the CEA.
This book deals with French nuclear dissuasion policy, from its origins during World War II, up to the present. It shows the close connection between the Resistance within free France, centered around De Gaulle in London, and the premises of the future French policy of nuclear dissuasion. The term “Resistance” in the title should thus be understood in its historic meaning: resistance to the German occupation during World War II and the defense of French autonomy – objectives incarnated by the group Nuclear Physicists for a Free France and, later, by the France’s refusal to submit to an Atlantic alliance. France’s unique nuclear energy history is studied here.
The book tells the story of the French nuclear adventure, which was simultaneously one of engineers, scientists (such as Frédéric Joliot-Curie), as well as political figures and theoreticians of dissuasion. It also looks at the relationships France maintained with its British and American allies up to the creation of the Commissariat à l’énergie atomique [French Alternative Energies and Atomic Energy Commission] (CEA), in 1945.
The birth of this policy of dissuasion is marked by the traumatic collapse of France in 1940. Dissuasion, that is, a refusal of nuclear war, and the goal of turning the territory into a sanctuary, were the responses to the disaster of the invasion.