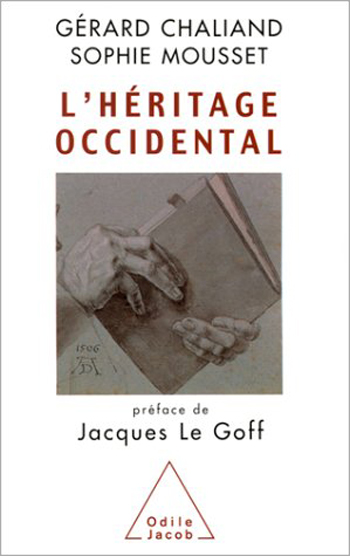 local_libraryTake a look inside
Until the beginning of the nineteenth century, the western literary and intellectual tradition was embodied by the following works and authors, among many others: the Old and New Testaments; Homer, Hesiod, the writers of Ancient Greek tragedies, Plato, Aristotle; Cicero, Plutarch, Saint Augustin; The Song of Roland, Tristan and Isolde; Dante, Thomas More, Luther, Machiavelli, Rabelais, Montaigne, Shakespeare; Milton, Descartes, Pascal, Fénelon; Giambattista Vico, Diderot, Rousseau, Adam Smith, Kant, the Marquis de Sade, Condorcet; Edmund Burke, Constant and Jeremy Bentham.
Successive generations of thinkers and writers built on this tradition, which served for many centuries as the pillar of education.
In LHéritage Occidental, Gérard Chaliand presents and puts in perspective some of the most significant works of the European tradition, often in new translations.


I love and admire this unique anthology because it shows the diversity that gave birth to the West. And out of this sometimes antagonistic diversity, the West was capable of producing a multi-faceted synthesis, which is both open and dynamic. Gérard Chaliand and Sophie Mousset succeed in illustrating this because they have understood its lengthy history.
Jacques Le Goff