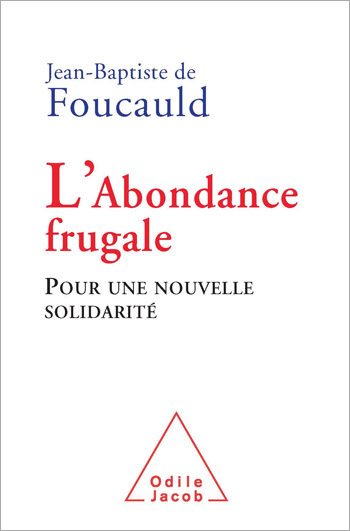 local_libraryTake a look inside
“Having failed, before it was too late, to rectify inequalities that we knew were on the rise, we must now face the challenge of resolving three crises simultaneously instead of one.

“First there was the unemployment crisis — a crisis of exclusion and a profound, latent social ill. The environmental crisis was next, followed by the present financial crisis, which came about not only because the rules of healthy financial management were forgotten, but also because financial markets were asked to compensate for the weaknesses of the redistribution system.

“Doesn't the illness run deeper? Isn't the financial crisis a late symptom of excessive, poorly oriented desires? Having lost all notions of boundaries, we want more and more and we want it now — with the result that we must be increasingly profitable. Indefinite and infinite bonuses are the rule. Our society engenders more desires under new forms than it can possibly satisfy. That is the new, fundamental problem that must be faced.

“The solution is not economic downscaling or austerity. Instead, the three key rules of the future will be sobriety, justice and creativity. Sobriety is the obligation to choose between the essential and the superfluous. It poses the question of justice and of redistribution, obliging us to find the balance between professional, personal and spiritual demands — because our society has lost the sense of harmony between these three dimensions, which are essential for personal development,” writes Jean-Baptiste de Foucauld.

• Does the solution to inequality lie in an illusory desire for more and more? “No,” replies Jean-Baptiste de Foucauld, who instead argues for “greater sobriety for greater justice, and increased creativity for increased meaningfulness” in a society based on “frugal abundance” — a phrase he coins and wishes to see applied to the society of the future.

• A profound, radical contribution to a much-needed discussion to re-establish the social contract.

Jean-Baptiste de Foucauld is a former General Commissioner of France's Economic Plan (1992-1995) and has worked closely with Jacques Delors. Sometimes known as the “functionary monk”, he is recognised for his life-long commitment to social issues, notably as the head of associations that fight against social exclusion and unemployment, such as Solidarités nouvelles face au chômage and Démocratie et spiritualité. In his highly successful work Une société en quête de sens he had already denounced precariousness and exclusion.