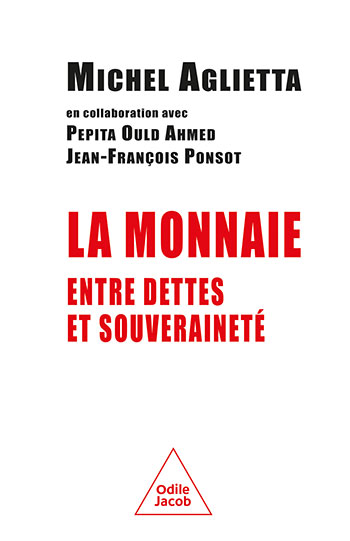 Money: Between Debt and Sovereignty

Michel Aglietta is the author of major works published by Odile Jacob, most recently Un New Deal pour l’Europe (A New Deal for Europe), co-written with Thomas Brand, and La voie chinoise. Capitalisme et empire (The Chinese Way: Capitalism and Empire, co-written with Guo Bai. He is Professor Emeritus at the University of Paris X-Nanterre and scientific advisor to the CEPII and Groupama-AM.

With this book, Michel Aglietta shows that it is not markets that are the main determinant of the economy, but money. Because money is not only the instrument that brings us everything we want, it is also the essential institution without which markets cannot exist. A true "political animal", money introduces policy — the "sovereign" — and, with it the entire history of society.
Deeply multidisciplinary, this exceptional work opens with an exploration of the anthropological drivers that legitimize money: what gives us confidence in a money? It then examines its various historical forms, from the invention of writing to the present day, before questioning the ambivalence of money — at the same time liquidity and institution — and what makes it an agent of crisis.
Finally, the comparison of monetary systems in the international order raises the issue of a truly supra-national money at a time when the dollar is the subject of many questions.

Authoritative and highly respected, Michel Aglietta is France’s leading money specialist. Exciting developments on the parallel inventions of money and writing (Sumer, Egypt), on the great financial crises of history, on today’s currencies (the yuan, the dollar).
Michel Aglietta is one of the leading "unorthodox" economists who, along with André Orleans and others, advocate the integration of economics into the social sciences.