...
Catalog
Human Sciences
Economics and Finance
where is the world going? 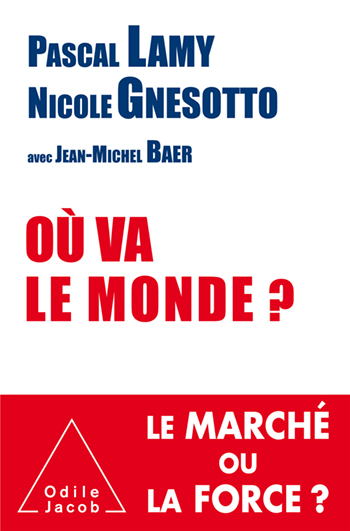 where is the world going? Two views of the world and of globalization

Pascal Lamy, Jacques Delors’s former chief of staff, was a European Trade Commissioner (1999-2004) before serving for two terms as Director General of the World Trade Organization (2005-2013). Since September 2016, he has led the French government’s bid to hold the 2025 World’s Fair. He is the author, most notably, of Quand la France s’éveillera, (“When France Awakens”, a best-seller published in 2014).
Nicole Gnesotto, professor at the CNAM (National Arts & Trades Centre), specializes in international relations issues, particularly European ones. She ran the Institut d’études de sécurité de l’Union européenne from 2002 to 2007.
What runs today’s world, might or the market? State-sponsored violence – which is booming – or a globalization that is leading to an ineluctable convergence? In this book in two voices, Pascal Lamy and Nicole Gnessoto confront their world views in order to try to decipher the dynamics that are at work.
On the one hand, Pascal Lamy, without denying current conflicts, highlights their peripheral nature. For him, these past 30 years of economic integration and of North-South re-balancing, as well as of the emergence of a global middle class, are unprecedented historical factors pleading in favour of geoeconomics.
On the other, Nicole Gnessotto refers to “a new world disorder”. While peace and prosperity were seen, barely 20 years ago, as the magical promises of “happy globalization,” Putin’s Russia, China’s militarization and ISIS’s territorial ambitions, among other examples, reveal just how stubborn the brutal forces of geopolitics can be.
Sharpening their arguments and clarifying their positions over the course of their debate, Nicole Gnessotto and Pascal Lamy agree on Europe’s key role in what’s taking place in the world today, its disillusions as well as its promises that can still be kept.