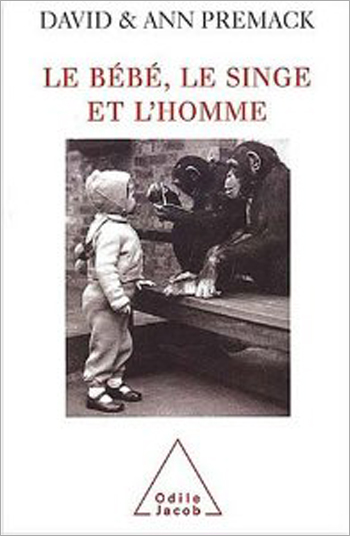 The Baby, the Ape and Man Translated from the English (United States) by Rémi Lambrechts and Elsa Kirsch.

local_libraryTake a look inside
The issue of the differences and similarities between humans and their cousins the chimpanzees governs the definition of human identity. Although 98% of the DNA of the two species is identical, their respective abilities are light years away. How can this difference be explained? By studying the learning process of chimpanzees and comparing it to that of children, Ann and David Premack were gradually able to discover a series of differences, none of which were radical but when put together showed a yawning gap between the two species. For example, chimpanzees and humans have the same working memory, but humans succeeded in overcoming its limits by inventing writing.
The authors describe a series of pedagogical experiments, using words, sentences, beliefs, causality, equivalence and analogy, which they carried out with children and chimpanzees and then with other primates and finally with other animal species. The results they obtained enabled them to reconstruct little by little the sum of the differences that make up human identity. For Keats, truth was beauty; for the Premacks, pedagogy is an aesthetic experience.

Ann and David Premack are specialists in the study of primates.