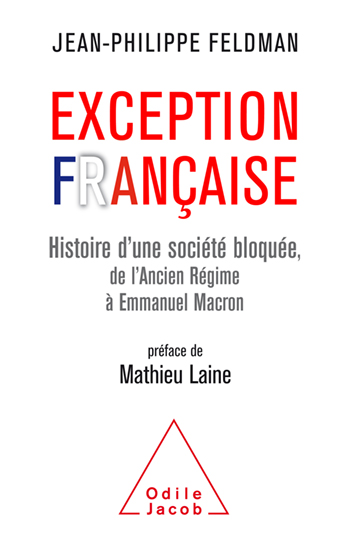 The French Exception From the Ancien Régime to Emmanuel Macron, the story of a blocked society

Jean-Philippe Feldman is associate professor of law, senior lecturer at Sciences-Po, and a practicing attorney in Paris. A writer and specialist in the history of political ideas he is the author of the recently published Transformer la France.
Feldman opens with a paradox: although the French complain that their country is too liberal, it isn’t, and never has been. Capitalism, liberalism, a market economy, profit, and free enterprise are subject to public opprobrium, as if public powers were weak, whereas the state is omnipresent. In fact, he argues, it is the only developed country to amass so much proof of anti-liberalism, representing “an unfortunate singular exception in the world.”
To support this thesis, Feldman thoroughly traces the roots of French statism, through its origins, construction, and early development. This long vision which spans 1,200 years from Charlemagne to Emmanuel Macron helps explain why the French, unlike the Anglo-Saxons, are enamored with authority rather than freedom, are defenders of obligatory payments, egalitarian, endowed with a welfare state, a bloated pubic administration, wary of free trade and globalization.
That history allows us to understand why France is a gridlocked society and reveals a rather unflattering portrait of the State: centralized, interventionist, protectionist, badly managed and fiscally oppressive, clinging to bureaucracy, profoundly anchored in statism. Prefaced by Mathieu Laine, the book then addresses various questions along the way: did Napoleon III liberalize the 2nd Empire? Did France go from free trade to protectionism in the Nineteenth Century? Did de Gaulle change the country in 1958? In closing, the book looks at President Macron’s desire, not to reform an “unreformable France,” but to “transform” it.