...
Catalog
Human Sciences
Right, Justice
What Is a Rule of Law? 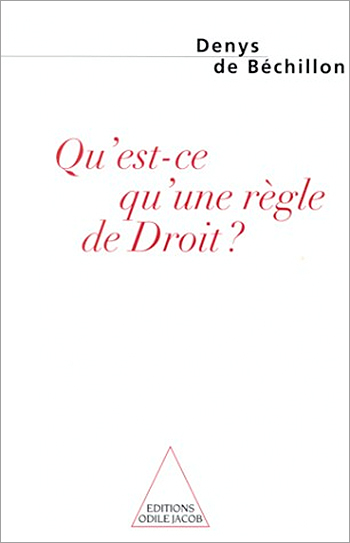 What Is a Rule of Law?

local_libraryTake a look inside
The accent is placed on certain aspects - the most contemporary ones - of the debate : can we arrive at a definition of the rule of Law ? Does legal normativeness have a compulsory character ? What distinguishes moral law from religious law ? This book would also like to promote a particularly "open" conception of the knowledge of law, by confronting it with other cultures and other disciplines - as it is so clear that an exclusively legal look on Law has a deforming character.The demonstration of Denys de Béchillon is organized in two parts. He first emphasizes the considerable role played by the State in the process of the identification of legal rules. The State, in effect, has an absolute monopoly on the publishing of Law ; it is the State who determines the appartenance or the non-appartenance of a norm to the preconstituted category of rules of Law.It would appear that this point of view ignores a multitude of phenomenons which cannot be attributed to State institutions. The author thus takes on the task of showing us that Law can and must be defined in other spheres (societies without State power, local groups representing local traditions, assemblies of strangers, etc...). These minorities distill their "Law" in diverse actions, and although public power refuses to see them as the manifestation of a legal phenomenon, these groups act "as if" their own modes of regulation were effectively legal.This is thus a book which relativizes the definition of Law : the author states that there cannot exist only one definition of "positive" Law ; however, there can very possibly be two, both of which are correct within their domains, in spite of their mutual contradiction.Denys de BECHILLON is a researcher at the CNRS and teaches at the University of Pau (France) where he co-directs the Group of Transdisciplinary Reflections. He is also the Secretary-General of the French Association of Anthropology and Law.