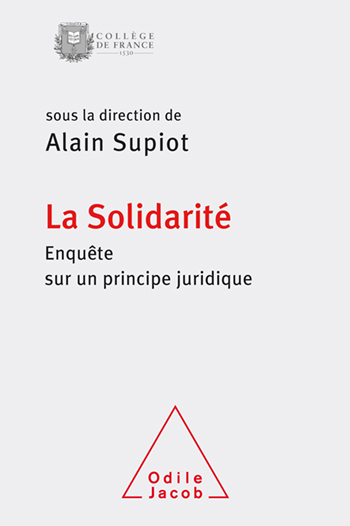 Solidarity An Enquiry Into a Legal Principle

Alain Supiot is a legal scholar and a professor at the Collège de France (Chair: The Social State and Globalisation: A Legal Analysis of Forms of Solidarity). His research interests focus on two complementary areas: social law and legal theory. He is the author of several works, including Droit du travail, The Spirit of Philadelphia and Homo Juridicus.

Reasoning in terms of globalisation means recognising, now as always, that there are several ways of humanising the planet, but that, now more than ever before, those ways greatly influence one another. It is from this standpoint that the present enquiry was undertaken to examine the meaning and future of the legal principle of solidarity.
This book, which resulted from a seminar held at the Collège de France on 5-6 June 2013, does not broach the subject of solidarity as the answer but as a question, or, rather, as a series of questions: in what context, and to what ends, did the notion of solidarity first appear and in what diverse areas of knowledge was it used? What echoes exist of solidarity in cultures and societies far from the one where it originated? What are the legal manifestations of solidarity in the contemporary world?
Underlying all the contributions in this book is the question: could the principle of solidarity be recognised beyond the legal culture where it originated?

• Solidarity remains a central issue in times of economic crisis.