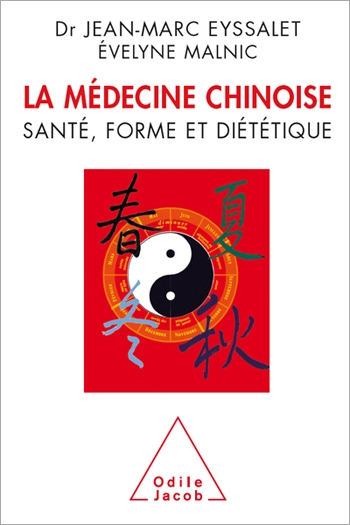 local_libraryTake a look inside
For our health and general wellbeing we are constantly being urged to change our lifestyle.

Over the ages, the Chinese have developed notions of health based on a thorough knowledge of breathing, on the importance of food choices and flavours, and on a profound respect for Nature's and the body's rhythms.

What could be more natural than adapting self-care to seasonal cycles? This is one of the driving forces behind Chinese medicine, which is primarily a preventive science that aims to regulate and strengthen the organism's functions.

By favouring natural foods endowed with particular energetic properties we can reduce and correct inner imbalance. Natural foods, in conjunction with breathing exercises, are known to have a beneficial effect on health and general wellbeing.

Doctor Jean-Marc Eyssalet, a specialist in Chinese medicine, presents here the basic principles of Chinese thought (the notion of energy, Yin and Yang, food flavours, the seasons) as applied to health preservation. To help us protect and respect our organisms, he offers advice, describes the concept of seasonal breathing, and provides recipes inspired by the principles of Chinese dietetics.

• An approach to health and nutrition, based on a fully recognised and increasingly popular traditional form of medicine, as explained by one of the best Western specialists on Chinese medicine.

• An explanation of the principles of Chinese dietetics: the notion of food energy, Yin and Yang, the cyclical use of flavours as described by the great seventh-century Chinese physician Sun Simiao, the lunar-solar calendar, etc.

• More than 100 recipes classified according to the months and seasons of the year.

• For each month and season: a list of the corresponding foods, with their properties; health rules; and harmony-inducing Dao Yin exercises.

Dr Jean-Marc Eyssalet is a physician acupuncturist and the director of the Paris Institute for the Development of Energetics and Sinology. He is a professor at the University of Bobigny and trains physicians, in France and abroad, in the principles of Chinese medicine.

Evelyne Malnic is a journalist.