...
Catalog
Medicine
General
Speech on the Occasion of Entry into the French Academy and the Response of Michel Mohrt 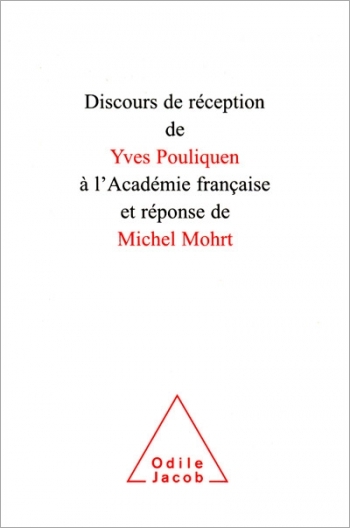 local_libraryTake a look inside
Yves Pouliquen, a professor of ophthalmology, was for many years the head of Ophthalmology at the Paris hospital lHôtel-Dieu and president of the French Eye Bank. He now heads the Organisation for the Prevention of Blindness. He has been awarded many scientific prizes, including the 1994 Cino del Duca Prize. He is the author of La Transparence de lil, Un oculiste au siècle des Lumières: Jacques Daviel, Le Geste et lEsprit, and a novel, Les Yeux de lautre. A member of the Academy of Medicine, he was elected to the French Academy in 2003, to the seat of Louis Leprince-Ringuet.

Michel Mohrt, a lawyer by training, has taught in many universities in the United States. A specialist in foreign literature, he is the literary critic for the French daily newspaper Le Figaro. He is the author of La Prison maritime, LAir du large and Un Soir à Londres. In 1983, he was awarded the French Academys prize for his entire oeuvre. He was elected to the French Academy in 1985, to the seat of Marcel Brion.