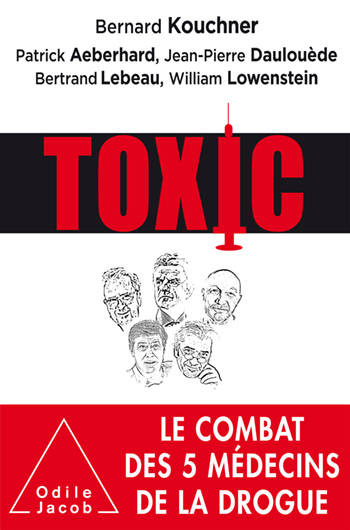 Toxicos Drug addiction: Thirty Years that Changed Everything – But Tomorrow?]

Bernard Kouchner: a politician, he is the founder of Doctors without Borders (DWB), Doctors of the World (DW), of the notion of the duty of intervention… He is a Nobel Peace Prize laureate for DWB. He was several time director of Health Services in Leftist administrations, in which he tirelessly fought to defend the interests of the sick rather than those of the medical institution.

Patrick Aeberhard: cardiologist, he met Bernard Kouchner in Biafra in 1969. They have been friends ever since. Together, they founded DWB, then DW. Advisor to Bernard Kouchner, he is the moderator between doctors in the field, public authorities, and associations. He contributes in conceptualizing new policies in the realm of drug addiction.

Bertrand Lebeau [“Bernard” above]: general practitioner, specialist in drug addiction, globe-trotter and journalist with an encyclopedic memory, he met Bernard Kouchner in 1979 in Paris and became one of the pillars of DWB. He opened the first methadone center in Paris in 1994. He has a drug addiction clinic in Saint Antoine.

William Lowenstein: hospital physician, internist and pulmonologist, he saw the first drug addicts die from AIDS at the Laennec Hospital in Paris. He was outraged by the shortsightedness of the specialists in drug addiction who intervened during that epidemic. He met Bernard Kouchner and Patrick Aeberhard in 1992, and since then has fought at their sides for alternative treatments. He is president of SOS Addictions, an association he created in 2002.

Jean-Pierre Daulouède: psychiatrist living in Bayonne where he created a methadone center in 1994, he carries out research on withdrawal which led him to work in the United States with the most eminent experts in drug addiction. A member of the circle of humanitarians of the DW, he is one of the best French specialists in cerebral mechanisms involved in drug use.
Drugs are a plague that for a long time France hasn’t been able to treat. The AIDS epidemic in the 1980s revealed even more harshly the blockage in the French health system.

It was in this tense context that a handful of doctors, led by Bernard Kouchner, became obstinately determined to change things. . .

Today, France has become the leader in matters concerning the treatment of drug users. Drug addicts are followed by generalists or in centers that specialize in addiction; overdoses are contained; the reduction of risks is winning out over cold turkey withdrawal; the drug use is henceforth treated like a full-fledged sick person. . .

To reach this point, it has taken three decades of determined effort.

This book tells of that impassioned effort, without neglecting the new challenges presented today by drugs, their uses, and the drug trade.