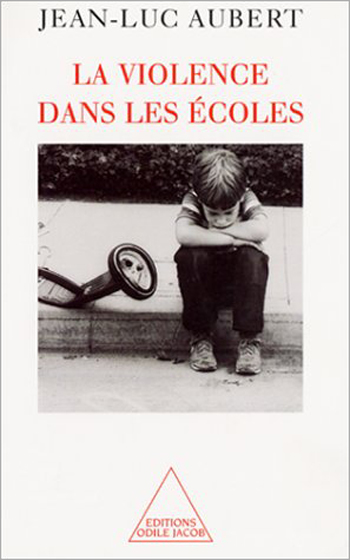 local_libraryTake a look inside
Why do some teenagers become violent, and others dont? Which children are likely to develop violent behaviour? What can parents do? And what should schools do about it?
Based on his own hands-on experience, which includes the counselling of thousands of children from many different backgrounds, Jean-Luc Aubert gives us here his analysis of the problem, which is as clear as it is unorthodox. He also offers some very sensible and unconventional  solutions.
o When faced with the problem of youthful violence, the following factors are often blamed: unemployment, television, political scandals, and broken families. Jean-Luc Aubert views these factors as activators, which will influence only those teenagers that are already fragile. He believes that the heart of the problem lies elsewhere: in the failure of these teenagers to learn to respect others and to assimilate the law. It is the absence of the educational relation, both at home and at school, which is to blame.
o The parents of violent teenagers are often held responsible: they are accused of giving up or not even trying and of being too weak. But what about the schools role? Doesnt it have an educational vocation to fill as well? The author believes that if parents are unable to educate their children, society should take over  just as it used to do in the past. It is up to the school to intervene and to serve as a link.
o It is sometimes said that schools are incapable of doing anything about teenage violence because their role is limited to instructing pupils, not educating them. Aubert replies to this, saying that schools must always do their utmost to prevent dangerous situations and explosions of violence; in order to do so, they must be given the means of implementing an effective and active policy of prevention. But how? The authors reply is threefold:
- By asserting the principle of authority within each school (redefining the role of the head, who remains the keystone of the educational system).
- By helping teachers to improve their understanding of the pupils in their charge (there is an absolute need for some serious psychological training, which is practically non-existent at present).
- By giving children, as early as possible, the means to belong to our society (this could be facilitated by the creation of a new type of nursery school, as well as by developing the feeling of belonging in primary and secondary schools).

Jean-Luc Aubert is a psychologist who has worked in Frances national educational system for more than fifteen years. He is the author of many books, including Quels Repères Donner à Nos Enfants dans un Monde Déboussolé?, published by Albin Michel. He practises in Nancy, France.