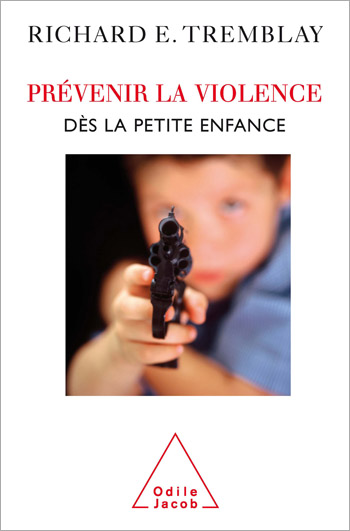 local_libraryTake a look inside
“Many people deny that violent forms of behaviour at different ages can be linked. This is what I hear and read every day: violent adults were not violent adolescents and violent adolescents were not violent children… These forms of violence are unrelated… Violence is circumstantial; it depends entirely on the environment, which changes with age. This is a fine, old, noble idea. Yet recent studies on the subject show that it is wrong — though it is also wrong to say that everything is predetermined by our genes, our parents or our education.

“It is hoped that this book will enable each of us understand what is at stake in children's socialisation — particularly of those children who are born and grow up in conditions that set them on a long trajectory of trials, failure and distress. Because I am convinced that only such understanding can lead to effective procedures and policies.” Richard Tremblay.

This well-argued demonstration is backed by numerous international studies which tend to prove that violent behaviour is acquired before adolescence and takes hold enduringly.

The author's approach to violence is based on probability, rather than determinism (“you were born violent so you are doomed to remain violent”). His goal is to provide effective tools that will be of real help to those who need it most, because they are the ones that are most at risk of becoming violent.

This controversial book offers pragmatic responses to the ideological arguments of French child psychiatrists, who are generally hostile to the early detection and prediction of delinquency.

A psychologist and criminologist, Richard Tremblay is an internationally renowned specialist on children's psychosocial maladjustment. Professor Tremblay teaches at the University of Montreal.