...
Catalog
Science
Environment, Sustainable Development
An Ecological Currency to Save the Planet 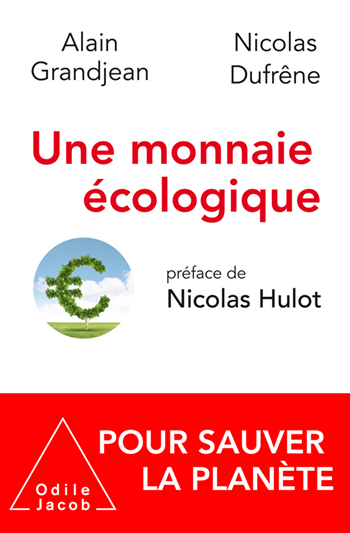 An Ecological Currency to Save the Planet Preface by Nicolas Hulot

Nicolas Dufrêne, a specialist in monetary policy, is director of the finance commission at the French Assemblée Nationale;
Alain Grandjean, a member of the Haut Conseil pour le Climat, is president of the Nicolas Hulot Foundation.
How to fund a Green New Deal
The climate crisis, now proven and indeed real, has come up against a daunting problem of funding. There is no classic financial strategy capable of rapidly raising the considerable sums that are at play. Unless… we change the rules of the game. History has shown on many occasions (the economic reconstruction of Germany in 1930; the American New Deal; the Marshall Plan in 1945; expansionist monetary policies in China) that currency can indeed be created, without a risk of inflation, in order to resolve an urgent problem. The climate is one such problem, and calls for a Green New Deal that, as the authors suggest, could include the creation of an “ecological currency” earmarked exclusively for ecologically beneficial projects.

Shake up the traditional economy to save the planet? When can we start?