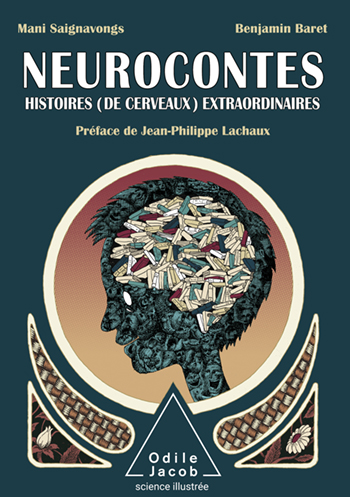 Mani Saignavongs has a Ph.D. in neuroscience, specializing in epilepsy. She has been involved for several years in projects on scientific mediation and knowledge-sharing with the general public. Benjamin Baret is primarily an illustrator, but also a painter, printmaker, graphic artist, among other things. He is very interested in science and particularly in the neurosciences, so much so that he ended up marrying a neuroscientist!
How can you explain the brain to young people, and to those who are not so young?
By telling them exceptional stories of men and women who have revolutionized our understanding, whether they were famous patients or extraordinary scientists!
Come hear the astonishing story of Henry, an epileptic patient to whom is owed the discovery of the existence of several types of memory; of Paul Broca, the wonderful doctor who came to understand how our brain speaks; of Joseph, a “splitbrain” patient whose two cerebral hemispheres were no longer connected; and also of Wilder Penfield, Suzanne, Solomon, David, Paul, and even Phineas Gage!
Our knowledge of the brain has increased spectacularly in the past two centuries. A large part of what we have learned originates in extraordinary, surprising, or disconcerting stories of people who, following an illness, a wound, or an operation, have found the functioning of their brain to be astonishingly modified. Neurocontes invites the reader to discover how patients, and their doctors, have thus had an impact on research in the neurosciences!