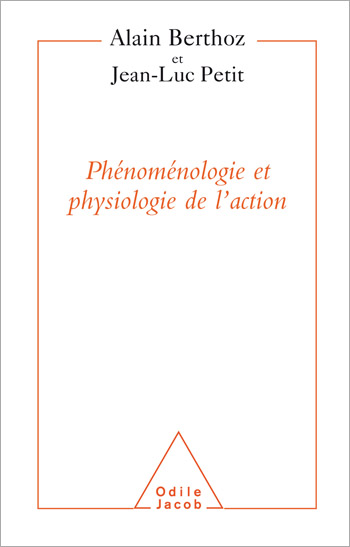 local_libraryTake a look inside
Philosophers and scientists are two groups that tend to ignore one another, each pursuing its own work as if the other did not exist  though they may, in fact, be working on the same subjects (space, time, movement, perception, etc.).
For once, a scientist and a philosopher have rallied their efforts in an effort to understand how our brain interacts with the world. Does the brain behave as a calculator, combining sense data before deciding how to act? Or does it behave as an emulator endowed with innate models of the world, which it corrects according to the results of experiences obtained by the senses?
The philosopher Jean-Luc Petit belongs to the philosophical tradition of Husserlian phenomenology, which includes such celebrated thinkers as Sartre, Merleau-Ponty, Ricoeur and Lévinas.
Alain Berthozs conclusions are based on his numerous experiments concerning the physiology of action (movement, posture, decision-making, perception, etc.).
The authors argue that human beings cannot be reduced to their logical and linguistic skills, and that their physical presence also attests to their rationality.
His collaboration with a philosopher has enabled Berthoz to draw out the philosophical meaning underlying his work on movement and decision-making.
Fully aware of the latest findings in the cognitive sciences, the authors have produced a work of philosophy for the twenty-first century. It is also a defence and an illustration of Continental European philosophy, in opposition to British and American analytical philosophy.