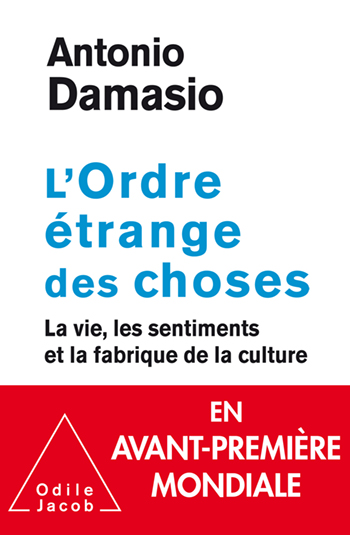 The Strange Order of Things Life, Feeling, and the Making of Culture

Antonio Damasio is one of the most eminent and pathbreaking specialists in the neurosciences. He is director of the Brain and Creativity Institute at the University of Southern California, and adjunct professor at the Salk Institute in La Jolla. His books have been translated into over thirty languages; he is notably the author of Descartes’ Error; Looking for Spinoza ; The Feeling of What Happens; and Self Comes to Mind, all bestsellers.
In the beginning there were feelings. With the verve and originality for which he is known, Antonio Damasio looks here at the question of the origin of human societies. His thesis is powerful, and will no doubt provoke reactions and debate: society and culture are born out of feelings and passions, out of suffering and pleasure, violence and compassion, sadness and anger. In other words, the origins of culture and society are biological. Out of all the mammals in existence, human beings have been able most advantageously to exploit feelings of pleasure and pain to organize life in society and develop thought. Everything that involves the mind thus has its source in feelings. This thesis is magnificently demonstrated here by one of the most eminent specialists in the neurosciences, who also looks at the future of culture, in light of the progress made in the realm of artificial intelligence.