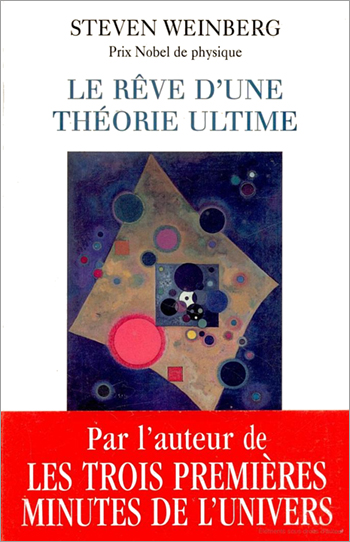 Dreams of a Final Theory Translated from english (United States) by Jean-Paul Mourlon with scientific collaboration of Jean Bricmont.

The Nobel Prize-winning physicist and bestsellingauthor of The First Three Minutes describes the grand quest for a unifying theory of nature - one that can explain events as disparate as the cohesion inside the atom and the gravitational tug between the sun and earth. In so doing, he asks : What will that theory look like ? And how will it reshape our everyday experience ?
Writing with dazzling elegance and clarity, Steven Weinberg retraces the steps that have led modern scientists from relativity to quantum mechanics, from the notion of superstrings to the possibility that our universe coexists with others.
But Weinberg poses as many questions as he answers. Among them :

*Why does each explanations of the way nature works point to others, deeper explanations ?
*Why are the best theories not only logical but beautiful ?
*What implications will a grand, unified theory for our philosophy and religious faith ?