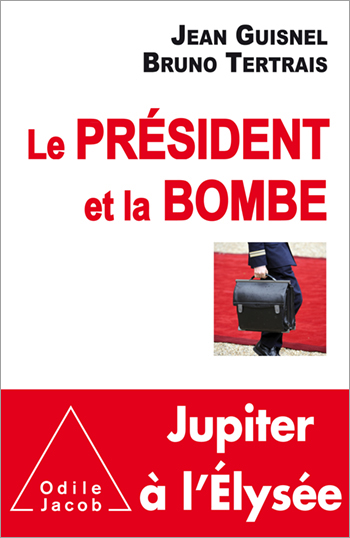 The President and the Bomb

Bruno Tertrais is an expert investigator on nuclear issues and author of numerous books on the subject.
Investigative journalist Jean Guisnel is the go-to specialist on intelligence matters. He is well-known as the author of Armes de corruption massives (Weapons of Mass Corruption), published in 2011.

Possession of the bomb shaped the Fifth Republic. The effect of this went far beyond matters of foreign policy. The power to unleash nuclear destruction affected the very personality of the country’s Presidents.

It is into this inner sanctum that we are guided by Jean Guisnel and Bruno Tertrais. Beyond “PC Jupiter”, the presidential command bunker beneath the Elysées Palace, or the “presidential briefcase”, what plays out here is much more than a simple political scenario. From General de Gaulle, the first president to decide to deploy a nuclear weapon, to the conflicts between François Mitterrand and his cohabiting Prime Ministers, via the rivalries between Valéry Giscard d’Estaing and Jacques Chirac, the authors lift the veil on the hidden episodes of French history. Unafraid, they ask the annoying questions: is it legitimate for France to possess this weapon? Isn’t the nuclear deterrent an unacceptable luxury in times of budgetary privation? What would happen if Marine Le Pen were elected to the Elysée?